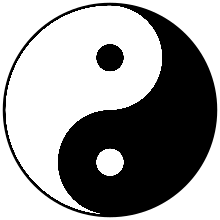 The principle of Yin and Yang is that all things exist as inseparable and contradictory opposites, for example, dark and light, old and young, female and male.

The concept traceable to at least the 3rd century BCE, is a fundamental principle in Chinese philosophy and culture in general. The two opposites of Yin and Yang attract and complement each other and, as their symbol illustrates, each side has at its core an element of the other, which are represented by the small dots. Neither pole is superior to the other and, as an increase in one brings a corresponding decrease in the other, a correct balance between the two poles must be reached in order to achieve harmony. Harmony with and balance of nature is a common theme in ancient many religions such as the Druids.

Yin and Yang became popular with the work of the Chinese school of Yinyang which studied philosophy and cosmology in the 3rd century BCE. The principal proponent of the theory was the cosmologist Zou Yan, who believed that life went through five phases called wuxing. These phases were fire, water, metal, wood, earth and they were continuously interchangeable as they interacted with the principle of Yin and Yang.

Yin reaches it’s height of influence with the winter solstice.

Yang reaches it’s height of influence with the summer solstice.

In Chinese mythology, Yin and Yang were born from chaos when the universe was first created and they are believed to exist in harmony at the center of the Earth. During the creation, their achievement of balance in the cosmic egg allowed for the birth of Pangu, the first human. Also, the first gods Fuxi, Nuwa, and Shennong were born from Yin and Yang.

The ever-changing relationship between the two poles is responsible for the constant flux of the universe and life in general.

Join On Myth
On Myth
Categories